The SECURE Act (Setting Every Community Up for Retirement Enhancement Act of 2019) took effect beginning in 2020, ushering in significant changes to retirement accounts.

New rules govern how retirement account distributions are treated following the death of the owner.

The Treasury Department on February 24, 2022, published a Notice of proposed rulemaking and notice of public hearing addressing required minimum distributions (RMDs), including clarity on aspects of the SECURE Act.

Among the proposals is a provision that makes additional changes to the requirements of the 10-year rule for heirs.

Since these proposed rules are subject to a 90-day comment period followed by public hearings, there could be modifications as the process evolves. 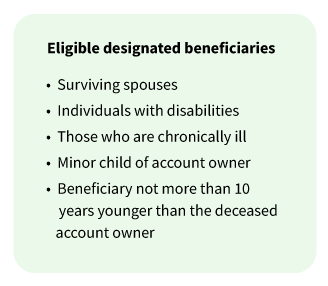 *Required beginning date (RBD) is generally April 1 of the year following the calendar year in which the account owner reaches age 72.

The distribution rules differ depending on whether the account owner died before their required beginning date.

Do certain heirs need to take distributions this year?

Financial professionals: Join our March 8, 2022 webcast for the latest updates on the tax landscape and key planning ideas to discuss with clients this tax season.