President Obama’s decisive re-election this week brought some clarity to investors, but the critical issues of averting the impending fiscal cliff and resolving the debt ceiling remain before Congress. While uncertainty surrounds the resolution of these issues, certain programs and tax increases will move forward.

Taxes will rise for some
The re-election of President Obama precludes a repeal of the Patient Protection and Affordable Care Act. Beginning in 2013, the health-care reform bill establishes a 3.8% Medicare surtax on net investment income. The tax affects individuals earning more than $200,000 and couples with $250,000 or more in income. The tax will be applied to interest income, dividends, capital gains, rental income, royalties, and non-qualified annuity income. Income not subject to the tax includes interest income from municipal bonds and retirement account distributions.

Fiscal cliff dynamic
Without action from Congress, the Bush-era tax cuts will also expire at the end of the year, raising the tax bracket for most taxpayers. It is unclear what action will be taken in the lame duck session of Congress, or if the cuts will be allowed to expire and the new Congress in 2013 will work toward a compromise and craft a retroactive fix. It is also likely that tax reform will again top the agenda for Congress next year as both parties made this a priority in the 2012 campaign. 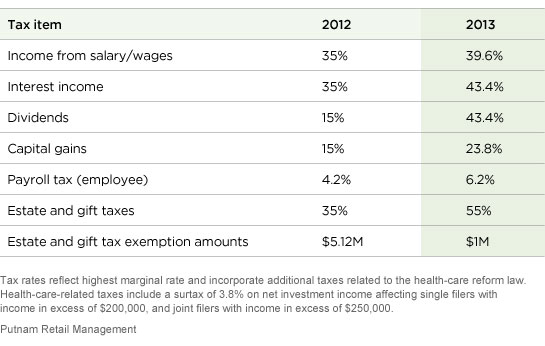 Congress eyes tax deductions and incentives for elimination
The nation’s debt issue has fueled a year-long debate on how to cut federal spending and raise revenue. As a result, many programs and provisions are on the table for possible limitation or, less likely, elimination. Among those are income tax deductions, such as the mortgage interest deduction, and tax incentives for retirement savings. Already proposals have been floated to limit the tax-advantage of contributing to workplace retirement savings plans.

Planning strategies for clients
In the wake of the election, now is an opportune time to discuss tax smart strategies with clients. And there are multiple strategies that can still be implemented before the end of the year. Before changes are implemented, taxpayers should make a comprehensive review of tax deductions and 401(k) contribution levels and ensure they are maximizing the benefits available to them in 2012.

As always, it is important to work with a professional tax planner to review an individual’s financial situation and which strategies fit in with planning goals. For more strategies to discuss with clients see our “Ten income and estate planning strategies for 2012” education piece.