Fewer taxpayers will have to pay the alternative minimum tax (AMT) because of changes resulting from the Tax Cuts and Jobs Act (TCJA).

Typically, approximately 5 million taxpayers pay the AMT annually. That total is expected to drop to only 200,000, according to the Tax Policy Center.*

There are several reasons for this projected decline:

The tax law scales back popular tax preference items. Historically, taxpayers who claimed high amounts of certain tax benefits (state and local taxes, personal exemptions, miscellaneous deductions) were more likely to be subject to AMT since the calculation for the AMT did not allow these types of deductions. Since the new tax law eliminates or limits many of these tax benefits, it’s less likely they will “trigger” the AMT liability.

The following example illustrates the impact of the TCJA on AMT. First, consider a married couple with two children and $300,000 in income. Assume they live in a state with relatively high state and local taxes. This graphic compares their taxes in 2017 versus 2018 under the new rules. 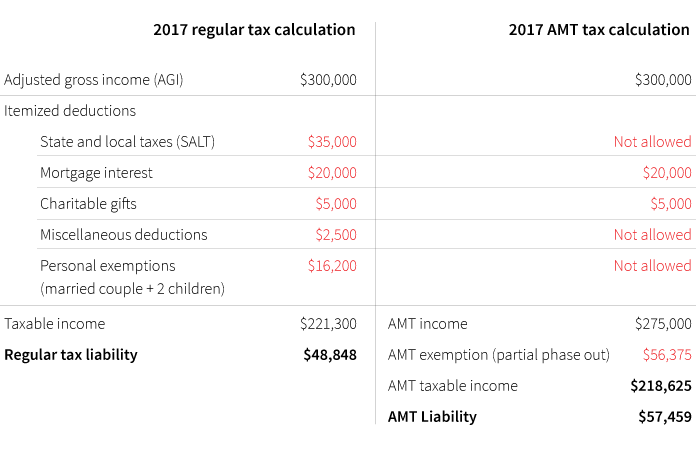 For 2017, the couple would be subject to AMT since the AMT calculation yielded more in taxes (a tax bill of $57,459). The amount of AMT is the difference of their AMT liability minus their regular income tax liability, or $8,601 in this case.

The following chart illustrates how 2018 compares, assuming the same amount of income but calculated under the new rules: 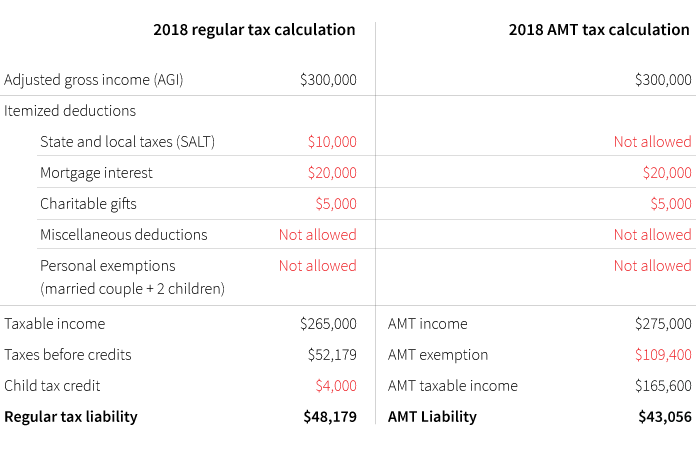 In this case, the regular tax liability exceeds their AMT liability ($48,179 to $43,056), so they would not be considered subject to AMT. In fact, their total tax bill under the new rules decreases significantly from $57,459 in 2017 (based on the amount of tax calculated under the AMT rules) to $48,179 in 2018 (based on the calculation of regular income tax under the TCJA).

Taxpayers who have been subject to the AMT in the past, may want to discuss the new tax law with a financial advisor or tax professional since there will be a good chance they won’t be subject to AMT in 2018. The new law brought many changes to deductions and credits, and how taxes, including AMT, are calculated. A review of the law can help taxpayers as they focus on financial planning for the coming year.

Examples are for illustrative purposes only.