Some tax proposals introduced as part of the Democratic presidential campaign target retirement savings accounts. Proposed changes to the tax treatment of retirement contributions could impact savers and strategies, negatively or positively, depending on income level.

In addition, other proposals would expand access to retirement savings for workers without an employer-sponsored plan.

Here are some of the highlights.

Under this proposal, the tax treatment of retirement account contributions would change from the current tax deduction to a refundable, flat tax credit. While details are scarce, some industry groups such as the Tax Policy Center have estimated the tax credit to be 26% for every dollar contributed into a plan. Contribution limits would not change under this proposal. Taxpayers in higher brackets would experience a lesser tax benefit under this structure. Conversely, taxpayers in lower income tax brackets would benefit from higher tax savings as a result. 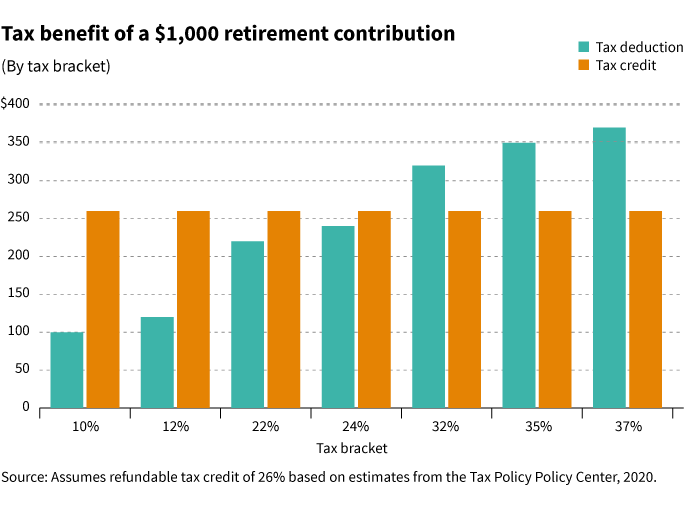 The Biden plan refers to a ‘401(k)-type plan will have access to an “automatic 401(k),’ which provides the opportunity to easily save for retirement at work” to address the coverage gap that exists for workers without access to employer-sponsored retirement plans. Presumably, this would be similar to the “auto IRA” proposal that has been discussed by policy makers for more than a decade. Most recently, an auto IRA program was included as part of the Obama administration’s Fiscal Year 2017 Revenue Proposals. The auto-IRA program would require businesses in operation for at least two years, with at least 10 employees, to provide an automatic enrollment, payroll deduction retirement account. Tax credits would be available to help these business offset implementation costs.

The Biden plan would modify Social Security through a mix of increased taxes for higher-income workers and expansion of benefits for certain beneficiaries.

Other potential changes under a Biden administration

Although not included in proposals provided by the Biden-Harris campaign, based on research of retirement-related policies proposed by the Obama administration, here are some other provisions* that may be introduced under a Biden administration: