Although Medicare is one of the most important health-care resources available for those 65 and older, many seniors find it confusing to navigate the program.

A review of Medicare’s basic elements can help individuals develop a better understanding before enrolling in the program.

The following chart illustrates the differences among the three basic parts of Medicare coverage. 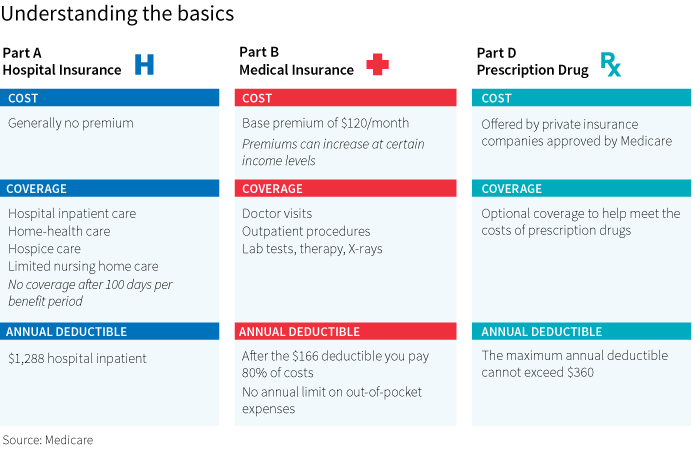 To avoid penalties and gaps in coverage, individuals need to enroll at specific times. Most people should consider enrolling during the initial enrollment period, which is the 7-month period around their 65th birthday. If they file during the first three months, coverage begins on the first day of their birth month. If they file during their birth month, coverage will begin the next month. Filing anytime during the final three months of this period means coverage does not begin until two months later.

Those already receiving Social Security benefits are automatically enrolled in Part A and Part B, beginning the first day of the month they turn 65.

Late-fee penalties are levied if retirees do not sign up when enrollment is available, including a 10% increase in the monthly premium for each full 12-month period that coverage could have been obtained. Although the Part B premium amount is based on income, the penalty is calculated based on the standard Part B premium, regardless of income.