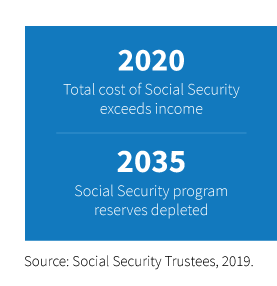 If no modifications to the program are made and current trends continue, reserves will be depleted in 2035. Benefits would still be paid but would likely be reduced to roughly 75% of the former benefit amount. In essence, recipients would receive a cut of roughly 25% in retirement income.

Costs of the program as a percentage of GDP will increase substantially through 2035 because the number of beneficiaries rise rapidly as baby boomers retire. Also, persistent lower birth rates have resulted in slower growth of employment and GDP.

The last time Social Security saw any major reform was more than three decades ago. To strengthen the program, Congress took several steps including raised the retirement age over time from age 65 to 67, increasing payroll taxes, and taxing a portion of Social Security benefits (based on income). Congress also instituted the Windfall Elimination Provision (WEP) and Government Pension Offset (GPO), which limit benefits for retirees who were covered under another pension system and did not pay into Social Security. For more details on the WEP and and GPO, read this SSA article.

Several changes to Social Security that have been proposed or discussed by policy makers in recent years.

In a 2015 poll, 36% of those approaching retirement indicated they expect Social Security to be a source of retirement income.

There are planning strategies that workers may consider to prepare for potential cuts to Social Security. Younger workers, in particular, may be affected by cuts due to solvency issues or policy changes. Investors could consider increasing current retirement savings rates to deal with a potential shortfall. Another strategy is to diversify retirement savings to hedge against the risk of rising tax rates. Consider allocating retirement assets into a Roth IRA as well as some pretax accounts. Lastly, since Social Security is often the only source of guaranteed income for today’s retirees, these investors may want to consider utilizing a portion of their retirement savings to purchase a guaranteed income product.